Amazing what a kitty can do!

There's a rural town in Japan at the end of a failing train line, which adopted a local kitty as its mascot...and now the town is doing $10 million in business a year to a tourist trade eager to visit the kitty and buy kitty things. She's really cute...a Japanese calico with a short tail. I haven't figured out how to embed the video, but you can read her story and watch the video here http://www.cnn.com/2008/WORLD/asiapcf/10/29/japan.station.cat/index.html.
Posted by quiltcat at 11:26 PM No comments:

A thank you card 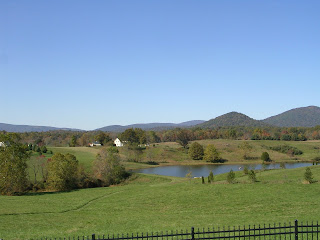 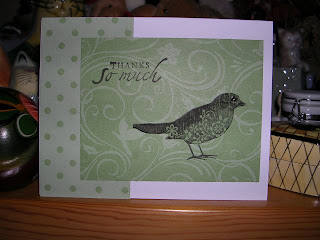 Our Sukkot celebration was held at the lovely home of one of the members of our Congregation. They live out in the country, on 10 acres of land with its own pond, rolling hills, and fabulous views. The day was quite chilly and breezy, but beautifully clear and sunny. I made a thank you card...the bird is popped up on dimensionals (little foam blocks with adhesive) and its eye is a silver bead. Not nearly as elegant as the home where we met, but the colors are in our hostess's dining room (fantastic pomegranate wallpaper sort of like a William Morris design in a yellowish green/gold).
Posted by quiltcat at 11:25 PM 1 comment: 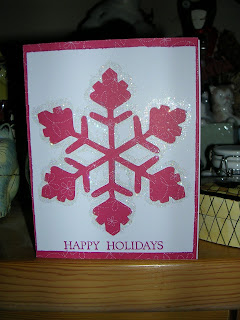 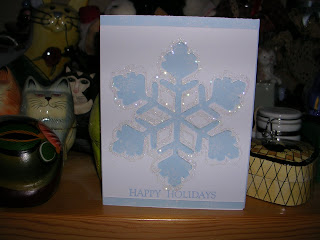 When we cut the snowflakes out of a square of paper with the BigShot, it left behind a "frame" with a negative image of a snowflake in it. At the very least i thought i could use these as snowflake stencils. Then it struck me that they would look great with some designer paper behind them...and made two cards this evening using the negatives from the two cards i made with die cut snowflakes yesterday.
Posted by quiltcat at 10:21 PM No comments: 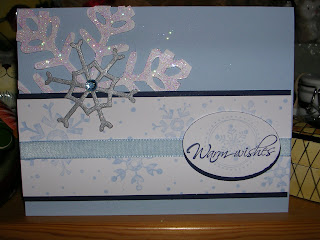 I recently became a demonstrator for Stampin' Up! (r). It's a home party plan that sells rubber stamps, paper, and all the wonderful embellishments that go with it. My original plan was to just buy the ink and stamps to use in quilting, which is my major creative outlet these days. But i've made my own cards for years, so i easily got hooked on rubber stamping my cards. And you can't buy just one stamp set...you also need assorted papers, inks, and on and on. It's addictive!

Yesterday (Saturday) i went to the home of my upline for a "WOW Christmas Cards Class" (admittedly a strange way for a nice Jewish girl to spend Shabbat...). I went with my friend April and there were 10 other women there. We made 2 each of 5 different cards in 5 hours...some of them were fairly labor intensive. All were lovely. The one pictured here uses the new BigShot to cut the snowflakes from paper or card stock. (These cards all had a lot of bling...i actually forgot to put a line of glitter along the edges of the Navy card stock but it's still got a lot of sparkle.)
Posted by quiltcat at 9:27 PM No comments: 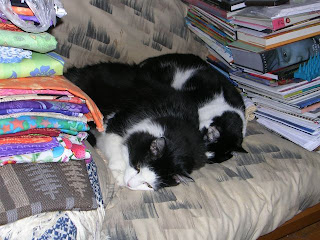 Welcome to my blog! I don't know whether i'll actually be able to keep up with it or not, but here you'll find mewsings about cats, quilts, stampin' (I finally bit the bullet and became a Stampin' Up! demonstrator this month), mewsic, Judaica, gardening, cooking, and the many other things that i find interesting.
This picture is from last night. The weather has turned very quickly to Fall, with temperatures outdoors approaching freezing and temperatures indoors fairly cool, t00. I'm not sure which cat got up on the couch first, but then the other one joined him...these two are neutered males, several years apart in age, one formerly the abused and neglected and abandoned cat of a neighbor, the other formerly the neglected cat of a different neighbor, and now they are both my dear cats and dear friends to each other!
Louie, the cat on the right, is the family ambassador. He likes everybody and MAKES them like him. Fuzzy, who is the largest and oldest (but not most senior) member of the household, can sometimes be timid. (Which is so funny, because i was afraid to let him in the house at first, thinking he would try to beat up all the indoors cats. Instead, fate forced my hand. I had to bring him in because he became terribly ill. As he recovered in the warm quiet of the basement, the other cats checked him out under the basement door. They actually all knew him, because they used to be indoor/outdoor cats, and ran into him in the yard. Anyhow, when he recovered and came upstairs, he immediately let it be known that he considered himself the low cat on the totem pole.) Fuzzy and Louie have a very warm friendship, almost like litter-mates.
Posted by quiltcat at 10:54 AM No comments: