"Homer's Odyssey" by Gwen Cooper--Cat Lovers, You Must Read This Book

Last week, a friend of mine gave me a heads up that Gwen Cooper was going to be interviewed on The Diane Rehm show (which originates at a local NPR station). I didn't get to hear the interview live because things got too crazy at work, but i followed the link from Diane Rehm's show to Gwen Cooper's website. She has an excerpt of the first chapter on her site, and i was instantly hooked. Luckily for me, she has links to booksellers' sites right under an image of the book cover, so i was able to order a copy...and then wait impatiently for it to come.
The book came on Monday night; Tuesday evening after quilting and Wednesday evening i sat down on the couch (to the great pleasure of the cats) and galloped my way through the book.
Homer's Odyssey is very appropriately subtitled "A Fearless Feline Tale, Or How I Learned About Love and Life With a Blind Wondercat." Someone finds a tiny black kitten whose eyes probably never had a chance to open because of a severe infection. They cared enough to take the kitten to a vet, but made excuses why they couldn't keep him, once they realized he was blind. The young idealistic vet saved the kittens life by surgically removing his eyes...and then almost despaired of finding someone who would adopt him.
Gwen was only 24 years old, working for a non-profit in Miami, and already owned two cats. She agreed to look at the kitten...and was immediately smitten. From the kitten, whom she eventually named Homer after the blind Greek poet who wrote of love and wandering, Gwen learned a great deal about courage and about love. In Gwen, the kitten found a loving, admiring, sometimes exasperated, mother. Homer had many unusual adventures, adapted to two feline housemates, 6 moves, and the addition of Gwen's husband to the mix.

Of course my poor cats got tears rained down on them at points in the story, but as one reviewer said, it's really nice that this story ends with the protagonist still alive! At age 12, Homer has had one serious health crisis and is slowing down a little, but he's still going strong. Long live Homer the wondercat!
Posted by quiltcat at 6:47 PM 17 comments: 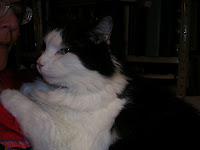 "What's the matter, are you having trouble typing?" 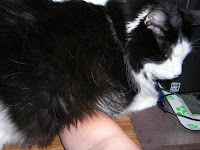 "Are you growing kittens on your desk?" I just "furminated" Fuzzy for a few minutes and this huge accumulation of fur was the result. 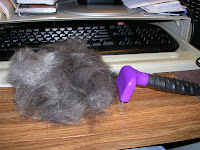 I'm happy to say that the random number generator came up with the number 6, so that means that Judy Hartman (and Kristy) wins the cat mat. Judy's in the hospital, hopefully just for a few days, hopefully just having some antibiotic therapy...so Judy, please get well soon, and when you get back, please send me your mailing address and the mat will be on its way to you and Kristy.

I'm sure glad that i didn't have to decide the winner based on whose comment was the nicest/most appealing etc. because i loved what each one of you wrote and would have liked to have given each of you a cat mat! Thank you!
Posted by quiltcat at 6:18 PM 6 comments: