During Yom Kippur services (which took place this year on Saturday), Jewish communities around the world recite Yizkor, which means "remembrance" in Hebrew.  We pray for our individual loved ones whom we have lost and then we pray as a community for those who have no one to pray for them. I love this prayer, although it's intensely emotional to recite it.

"The death of those we now remember left gaping holes in our lives. But we are grateful for the gift of their lives. And we are strengthened by the blessings which they have left us, by precious memories which comfort and sustain us as we recall them this day."

The prayer for my mother "May God remember the soul of my mother who has gone to her eternal home. In loving testimony to her life I pledge charity to help perpetuate ideals important to her. Through such deeds, and through prayer and memory, is her soul bound up in this bond of life. May I prove myself worthy of the gift of life and the many other gifts with which she blessed me. May these moments of meditation link me more strongly with her memory and with our entire family. May she rest eternally in dignity and peace. Amen."

To all who have lost loved ones, may their memory endure as inspiration for deeds of charity and goodness in our lives. May they rest in peace. Amen.
Posted by quiltcat at 8:41 AM 10 comments:

Does This Look Like a Sick Kitty to You?

Last year i purchased a quilting pattern designed by Sheryl Mycroft called Cobblestone Crows from my friend Karen Sue's booth, maybe at the QU show. At any rate, it was one of those projects that really stuck in my imagination and i knew i was going to make it sooner rather than later. When i went to the Vermont Quilt Festival this summer (yes, i know, i still have to post stories and pictures from there!), i took a bunch of fabrics from my stash with me to see if i could pick the ones that would go in the quilt. I knew i wanted to change the color scheme and had the perfect print with metallic gold accents and moon-like patterns as the focus fabric. I found the perfect background fabric at Yankee Pride Quilts, picked up a few fat quarters of batiks at a few other booths, and got the high thread count black Kona cotton for the crows after i got home from my local quilt ship, Kelly Ann's Quilting.

It went together fairly fast, but now it needs to be machine quilted, so that i can embellish the heck out of it. It will finish approximately 28 inches square, and is actually fairly straight, but since it was blowing in the breeze, it looks like it's got a bit of a ripple. 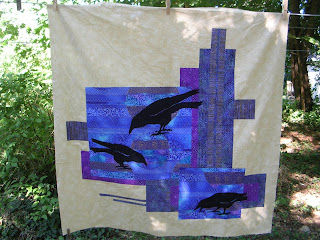 The crow in the foreground will be holding a shell bead in its beak and there will be a line of four shell beads down the tallest strip in the background. I have some great assortments of small beads that should be perfect for the embellishing.

I find crows and ravens to be fascinating creatures...so curious and observant, and living in complicated social communities. When i was walking around in Sitka, Alaska, i realized that a couple of ravens were following me all over town. Raven and Eagle are traditional adversaries in Northwest Coast Native American mythology, and Raven is the Trickster who stole the Sun from its guardian (but by so doing, brought light, and possibly even the miracle of human birth, to the world). Then, this Spring while i was avidly watching the eaglets at the Norfolk Botanical Garden grow from tiny chicks into healthy fledglings through the cam pointed at their nest, we got news that a raven had stolen an egg from the eagle's nest on Vancouver Island, British Columbia. It was recorded on that nest's cam....you can see the mother eagle leaving the nest for a moment, the raven flies in, snatches one of the two eggs in its beak, and flies off! It was a devastating moment for fans of that pair of eagles. If the raven had any fans, they might possibly have been cheering it for outsmarting the eagle.


Finally, with great synchronicity, Jackie Morris, one of my favorite authors and artists,  has just published The Ice Bear, about a raven who steals one of the Ice Bear's cubs and leaves it to be found by a childless hunter and his wife. Both the mother bear and the human parents suffer great loss, [spoiler alert!] the child bridges both worlds, so while it seems as if the raven has done a terrible thing, he sets in motion some very important events and relationships, and at least in this telling, he helps keep one side from killing the other.
Posted by quiltcat at 4:38 AM 9 comments:

It's continued to be hot and dry here (although the last few days the temperatures have finally become more season-appropriate). I finally ate enough delicious fresh tomatoes that i was willing to cook a few, as in this okra-corn-tomato dish. 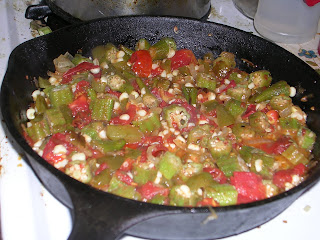 My own garden is nonexistent this year...just have catnip and mint that came back from last year. Even my compost heap shows signs of neglect...i don't think i've adequately turned it and moistened it so it can get hot and decompose efficiently. I went out the other day and found an avocado tree sprouting in the middle of the heap! 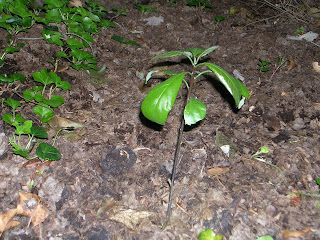 A few weeks ago, my father and i went to the wonderful, family-owned and -operated Hartland Orchard, where I picked two pecks of Redskin peaches in about 15 minutes...and a pint of raspberries in an hour (it was the end of a long Saturday and they had been very thoroughly picked over). My father scored all sorts of points with friends in his retirement community to whom he took back peaches. I didn't give nearly as many away...saved quite a few to make a peach pie for my father the following week and also to make peach liqueur following Sylvie Rowand's recipe (i have to pour off the liquid this weekend and i am really looking forward to tasting the tipsy peaches that result!).
The week after we picked peaches, i drove my father down to Waynesboro to visit the Wildlife Center of Virginia which is mostly a hospital for treating native wildlife, but offers tours to the public a few times a year. My pictures didn't come out very well...most of the raptors were in wooden-sided cages outside and were quite dark inside. However, this lovely kestrel was close to the front so i was able to get a good picture of her.
The Wildlife Center does everything they can to heal their patients to the point where they can be released back to the wild. Some animals however have injuries that they recover from but which make them unable to fend for themselves in the wild. One of these is the cute little Screech Owl named Pignoli, shown below with education specialist Kelly. He is blind in one eye and has limited vision in the other (it's possible that he was struck by a train while pursuing insects), so he wouldn't be able to hunt for food. He has a very sweet personality and has taken easily to a role as an Education Animal.
Posted by quiltcat at 2:31 AM 3 comments: