Poor Gingy's lovely long fur became very matted in late summer. I could brush her a little but not nearly enough. She had to make numerous trips to the vet because she had a urinary tract infection, which then also affected her kidneys. Her fur around her back end was really matted...not good. So i called around and found a place nearby to get her groomed. Suffice it to say that it cost more than i've paid in my life for a haircut!

Her cut is called a "lion cut"...they leave the fur on the face, a little bit of the ruff, anklets on the feet, and the tip of the tail...the rest is trimmed right down to the skin. Here she is, right after her haircut. 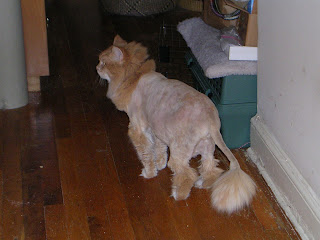 Poor naked kitty! The one upside...Gingy has been more willing to sleep near the boys 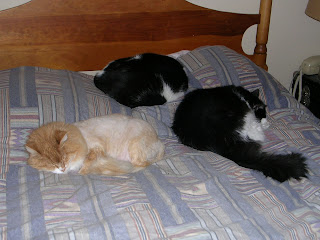 Now, four months later, her fur has grown out to about an inch long all over...and in the meantime, Gingy has taken over the prime "spot between the pillows" as her personal napping zone. 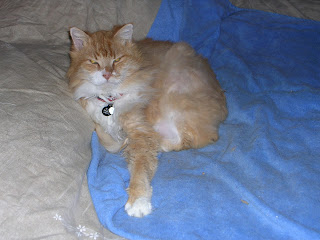 After a couple of months of medication, weekly subcutaneous fluids, and a change in diet, she has started to feel a whole lot better. I should probably take her in for another round of tests, just to make sure her kidneys are doing o.k.

But in the meantime, Fuzzy has been unwell...he's been very constipated. I'll spare you the details (which don't involve an enema, yet) but he's felt very miserable. However, his vet prescribed Lactulose, which is a stool softener, on the off chance that he might agree to take it (most internet citations say cats hate it). It's a sticky liquid and he's been taking it from a syringe with no fuss. It seems to be helping, although there's still a whole lot of "stuff" that needs to move out.

In the meantime, he inexplicably has lost several pounds, maybe because he was just picking at his food... All of his bloodwork is good, and now that he's feeling better, he's started eating and drinking and snuggling regularly again. I'm so relieved. Hate to see my big guy be so uncomfortable, missed his snuggles when he spent the night hunched uncomfortably in his nest box instead of in bed, and even worse, hate the reminder that he's at least 16 years old and is becoming an old cat.

I've started him on a very palatable canned food to get more liquid into his diet and every few hours he comes to get me to tell me he'd like another teaspoon or two of food. I am soooo happy to oblige!
Posted by quiltcat at 7:56 PM 8 comments:

Cold weather is for snuggling

Louie and Fuzzy on the couch the other evening. 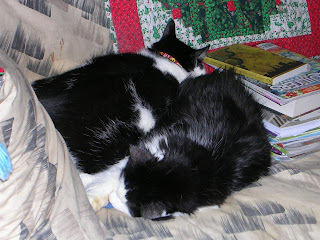 Louie enjoying his "hairy blankie," and soliciting a tummy rub 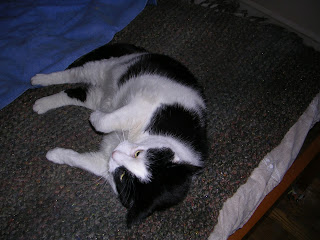 This picture makes me laugh...Gingy helping me telecommute by standing on the computer desk directly in front of me. She's fine with me reaching around her on both sides to reach the keyboard. She still isn't comfortable sitting or lying on my lap, but maybe she will be eventually...it's only taken her 5 years to get to this point! 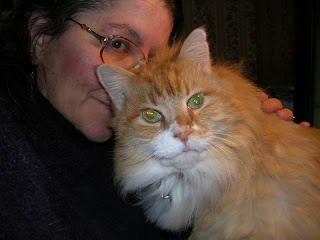 This is how a professional snuggler helps me telecommute. 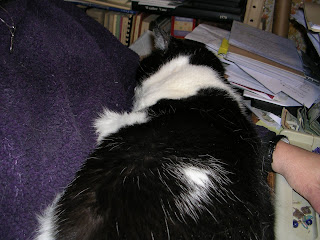 Stay warm and safe, everybody!
Posted by quiltcat at 6:19 PM 7 comments:

Snow in the forecast? Bring it on! 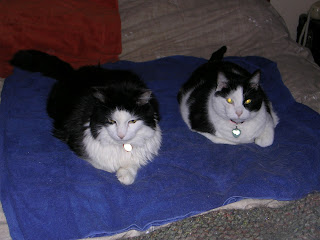 Or at least that's what Fuzzy and Louie seem to be saying! We've had a relatively mild winter in terms of snowfall compared to last year, although it's been quite cold, with several days last week when the temperature didn't get above freezing and got down to 11F at night. Today the forecast was for heavy snow in this area starting about the time of the evening rush hour, so my carpool buddy and i decided to work from home today.

The day began with drizzle, since it was above freezing, then changed to ice pellets, and sleet...and the moment the temperature dropped below freezing, it started snowing heavily. It's a very wet, heavy snow and sticking everywhere. It may be a real hassle trying to move it tomorrow...in the meantime, i'm content to stay indoors with the kitties.