What a difference 6 weeks--and a lot of loving--makes! 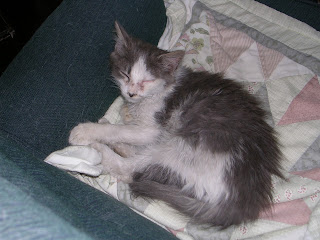 This is my friend Sue's kitten Waldo on August 21, just a few days after being rescued...she came upon him being rescued from under a parked car in a grocery store parking lot. He was filthy, frightened, skinny, and had a bubbly nose and dripping eyes. The sheriff's deputy who managed to get the kitten out from under the car also became filthy and dripping with sweat. He brought the kitten to Sue's vet, to make sure he was handing the kitten over to a good person. The vet gave the kitten a checkup and much needed bath, and determined he was about 4 months old. In this picture, he's still looking quite dingy and pretty miserable (the first few days he kept hiding, hence his eventual name!). 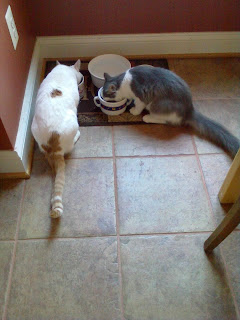 And here Waldo is yesterday, having supper with his "big sister" Zella...she's a year old and you can see that Waldo has become about 3/4 her size, fluffy, clean, and definitely not hiding! He still has a goopy eye...vet thinks his tear duct might be blocked, and will explore when Waldo goes in for neutering soon...but he's sure one happy healthy growing boy. 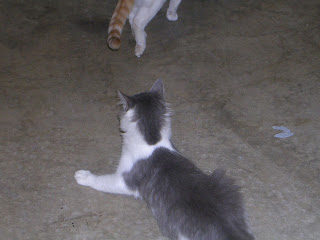 One last pic...it was supposed to be Zella and Waldo wrestling but she dashed off just as the flashy box went off. Look at those muscles and that incipient floof!
Posted by quiltcat at 12:52 PM