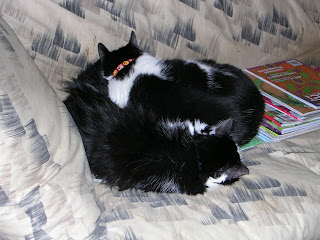 I went to visit my father at Thanksgiving...the place where he lives does a very nice buffet, combining tradtional Thanksgiving dishes with regular breakfast buffet items. The dining room was full of people from the oldest residents (there's one gentleman who's 101, still plays tennis, sings in the choir, and plays flute) to the youngest visitors (there were quite a few babies, toddlers, and even some teens). My father was telling the people who we were seated with that the day was something of an anniversary for him--it was at Thanksgiving dinner two years ago at my uncle's retirement community in southern New Jersey that my father realized he might actually consider moving to such a place. And not long after that that i told him if he was planning on moving, he might as well move closer to my sister or me...and that i happened to know that there were two similar retirement communities right here in northern Virginia. I'm so grateful he made that decision! It's nice knowing that he's safe, comfortable, happy...and nearby.

The weather on Thanksgiving Day was typical of late November...chilly, gusty winds, with dark grey rippled skies. Most but not all of the leaves are off the trees now. I saw lots of turkey vultures and black vultures soaring and kettling in the wind...think they were making up for lost time because it had been rainy and bleak the day before. And there in between two big turkey vultures was an adult bald eagle! I thought i could tell the two kinds of big birds apart, and then the three birds drifted over the intersection where i was stopped at a red light, and sure enough, there were the unmistakeable white head and tail of an adult bald eagle. Thrilling!

I've got oodles of pictures in the cameras and few stories to tell...will try to catch up on the blogging before work and holiday preparations close in on me again.

I hope everyone had a lovely Thanksgiving!
Posted by quiltcat at 11:27 AM