Chanukah was early this year!

Chanukah began during the first week of December this year...Thanksgiving was barely over and suddenly it was upon us! Our congregation's party was held on Sunday, December 5. Sometimes our services are poorly attended...but this year, more than 70 people came to the party, including several new families with young children. It was thrilling having such a big group of people together. Each family brought its own menorah and we lit them all together, so the room was ablaze with light and full of the sound of music and laughter.

I missed getting a picture of Louie sitting on the living room floor, looking up in apparent wonder at the menorah's flickering candles, but here he's sitting on the couch and you can sort of see the candlelight flickering in his eyes. 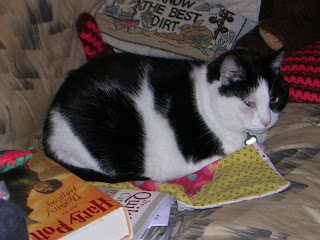 And here's an unfortunately dark photo of this year's Chanukah card, which i barely got made on time, and many of which i didn't mail on time (but at least i mailed a few them this year...last year i made a whole batch and never got a chance to address and mail them!) 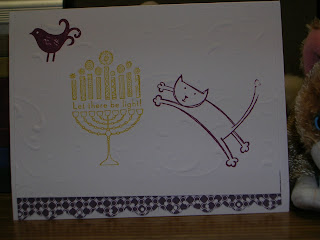